‘Repatriation’ of a Great Zimbabwe Bird

Abstract of a lecture held by Dr. William J. Dewey, Art Historian at the University of Tennessee on the return of a Great Zimbabwe Bird, part of the collection of the Ethnologische Museum in Dahlem, to Zimbabwe. 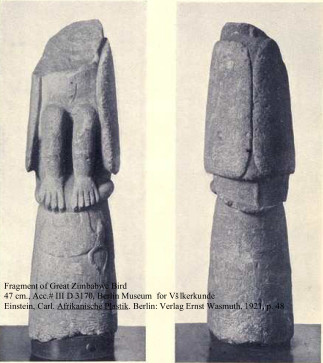 earliest illustration of the Berlin portion of the bird that I know of, and it’s from Carl Einstein’s Afrikanische Plastik published in 1921. The publication provides no information other than it was then in the collection of the Berlin Volkerkunde Museum. Dr. Peter Junge, the current director of the Africa collection of what’s now known as the Staatliche Museen zu Berlin, Ethnologisches Museum explained to me what happened to the bird during the Second World War. There also are a few articles on the fate of the collections.1 During the war many collections were packed up and sent to various parts of Germany for safekeeping. Sometime in 1944 some of the ethnographic collection was moved to a castle in Schrabsdorf in Silesia (now part of Poland). There it was captured by the Russian Army, taken as spoils of war and deposited in Leningrad Museum of Ethnography and Anthropology. In the 1970s an agreement was reached between the Soviet Union and the German Democratic Republic that the collections should be, quote, “repatriated’ to the “good Germany.” In 1978 the collection was taken to the Leipzig ethnographic museum (which had lost much of its collection in the war) but again this was done with the utmost secrecy and never acknowledged to the public. Only after the collapse of the GDR government, on the eve of reunification of the two Germanys, was the Berlin Museum told that the 45,000 objects they thought had been destroyed in the war still existed. It took the next two years, 1990 to 1992 to get the objects back to the Berlin Museum. […]

My own involvement in this story came in 1996 when I was arranging to borrow museum objects for an exhibition surveying the ancient and modern art of Zimbabwe that I was organizing with Africa Museum in Tervuren, Belgium. Here you’re seeing the cover of the catalogue. I knew that a lot of Berlin’s collections from the Kingdom of Benin, that they thought had been destroyed in the war, were in these recovered material, and so I asked the then director of the Africa collections, Dr. Hans Joachim Koloss, if the part of the Zimbabwe bird had also come back. He told me that it had. Zimbabwe was at first unwilling to lend any of their Great Zimbabwe birds to the exhibition (though we used the image of one on the cover), but when I secured the agreement of the Berlin officials to borrow the newly re-discovered lower half, they agreed to lend the upper part of the bird. At least a temporary unification of the two parts could then be accomplished at the exhibition. […]

In 1997 before the opening of the Belgian exhibition I told Dawson Munjeri, then director of the National Museums and Monuments in Zimbabwe, that that was the time that repatriation of the half bird should be sought, especially as the Germans had not really missed it very much for the last fifty odd years. That, however, would be a political issue that I could do nothing about. What transpired then is also somewhat unclear as museum officials have not told me many of the details. 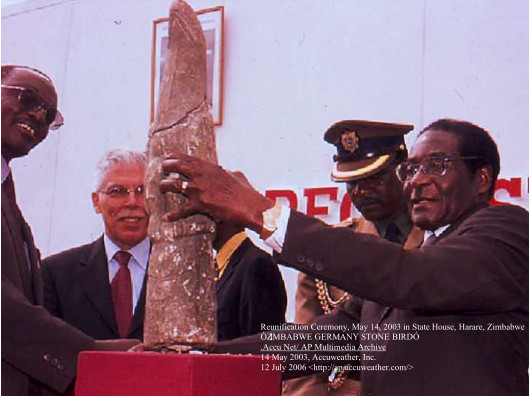 The German ambassador to Zimbabwe, Dr. Schmidt, explained to the Zimbabwe Herald, (May 16, 2003 at the time of the public ceremony to give the bird back) that “following representations from the German federal government, the Prussia Cultural Heritage Foundation [quoting from Schmidt ‘the legal owners of the fragment’] in 1999 agreed to restore to Zimbabwe the fragment and on February 1, 2000, signed an agreement to this effect with the Department of National Museums and Monuments. Dr. Peter Junge, the Director of the Africa Department personally confirmed to me that the bird fragment left the Berlin Museum in February of 2000. […]

Finally in February 2000 the German specimen was secretly handed over to the National Museums and Monuments of Zimbabwe by the German Ambassador under a memorandum of understanding in which the bird was being returned to Zimbabwe on “permanent loan” while the Prussian Cultural Heritage Foundation remained the legal owner of the fragment. The loan document thus technically avoided the subject of restitution.2

Why it took three years before the return was publicly announced in Zimbabwe is unclear. On May 6 th 2004, a year after coming back to Zimbabwe, the two parts were taken back to Great Zimbabwe to be installed in the site museum in a lavish ceremony. […]